The guitar is a plucked string instrument, we have seen its history in the history of guitar article, now basically we will name the parts of the guitar and its basic functions.

The guitar consists of a sound box formed by the top of the guitar that is the sound board, and its back and sides. When playing the strings, the resonance box amplifies the vibrations generated by the strings, which without this amplification would be practically inaudible.

At the top of the neck there is the fingerboard, a piece of ebony usually, with the frets on it. The frets are placed at a certain distance from each other. Pressing the strings on each fret the length changes and produces one note or another depending on the fret where we press, as we go down on the fingerboard, the short of the string and higher note.

On the soundboard we also find the bridge, a rectangular piece whose main function is to transmit the energy of the strings to the soundboard and determine (through the saddle in the bridge and the nut in the head) the length of each string (usually 65 cm)

We will discuss all these elements a little more in depth on this link woods for guitar.

The soundboard is a fundamental piece to determine what will be the sound of the guitar like. The sound will depend, among other factors, on the thickness, on the material used and on the inner construction (the disposal of the harmonics bars…)

Another factor that makes the soundboard an important piece is the fact that it is the part of the sound box which holds the bridge, and as we said, it will transmit the vibrations of the strings to the top and, therefore, will act as a “speaker” and will amplify it.

The rest of the sound box, the back and sides, provide the depth and duration of the sound, before the sound is transmitted (with some delay) from inside the box through the sound hole, as opposed to the direct sound, generated directly by the soundboard.

The bridge transmits the vibrations of the strings to the top and, therefore, act as a “speaker” and amplify it.

In the inside of the sound box (you can see it through the hole of the top) we first see the label, with the signature and identification name of the instrument (in case it is a handcrafted one). We can, with a mirror, look for other notes that may contain the guitar inside, where craftsmen guitar makers leave inscriptions on it to be able to demonstrate his authenticity beyond the label of the instrument.

By introducing the hand, we can find the harmonic bars under the soundboard, and other bars as reinforcement under the bridge.

The sides of the guitar are attached to the bottom through wood strips along the whole side to join it and depending on how the instrument was made, the sides will be attached to the soundboard by small triangular pieces stuck together one after the other.

Craftsmen guitar makers leave inscriptions inside the guitar to be able to demonstrate his authenticity beyond the label of the instrument.

The guitar quality sound will also depend a lot on the proportions of the sound box, on its depth, and the diameter of the sound hole. All these elements will determine the resonance frequency of the sound box and soundboard, when the box acts as a Helmholtz resonator.

The neck is the piece of wood (usually mahogany or cedar) standing out from the top of the soundboard and is another important part of the instrument.

The neck usually has an ebony reinforcement on it to avoid its curvature because this is a common cause of uncalibrated on guitars.

The neck holds a piece (usually of ebony) called fingerboard where the frets are located and where we press each string to shorten the vibrating length and produce notes of higher pitches.

The guitar quality sound will also depend a lot on the proportions of the sound box, on its depth, and the diameter of the sound hole.

At the end of the neck there is the head where we find the pegs, the mechanism to tighten or loosen the strings. It is important that the strings fly freely from the nut to the holes.

Finally, the bridge and strings. The guitar bridge is in charge of defining the length of each string through its saddle, and is also in charge of transmitting the vibration of the strings to the soundboard.

The strings can be found in different brands and types. The first strings may be nylon or carbon, in traditional or classical guitars. The strings for acoustic guitars and electric guitars are made of steel and have a brighter timbre and a more durable sound. 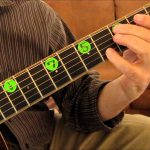 How to play Blackbird The Beatles 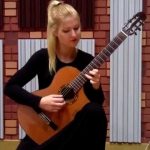 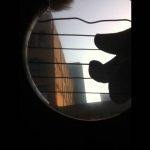 Guitar strings recorded with an iphone from inside 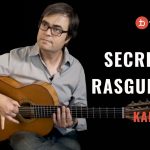 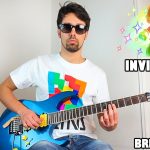 How to make Super Mario sounds with your guitar